The house was fabulous!

Home of the Week: taking inspiration from outdoors 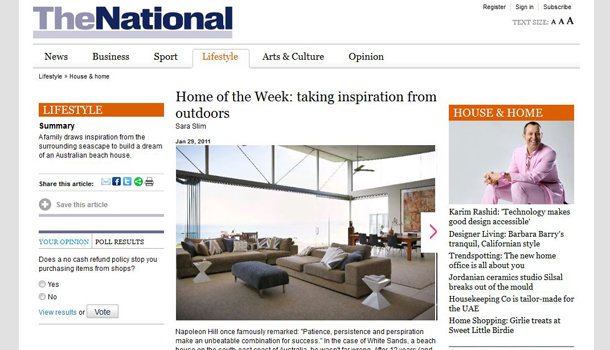 Napoleon Hill once famously remarked: “Patience, persistence and perspiration make an unbeatable combination for success.” In the case of White Sands, a beach house on the south-east coast of Australia, he wasn’t far wrong. After 12 years (and large amounts of steely resolve) the owners and their young family, have realised their dream.

“It took three years and 64 sets of revised plans before we finally received approval from the local council to build,”the owners say. “There were also many late-night negotiations over the contemporary design and building code restrictions, as well as some resistance from long-time village residents.

“When construction finally began, we then faced the inevitable challenges associated with building on a steep beachfront block in a small, isolated village, so our little piece of paradise certainly didn’t come easily.”

When the family purchased the property in 1998, a two-bedroom weatherboard house and a fibro shack were all that stood on the two-hectare block of land. “Originally my partner bought it with his brother, who found the property when scouting the local area for a building project. As boys, they’d spent a lot of time in the area with their grandparents, so they both had a very nostalgic connection with Hyams Beach,” the owners day.

Located within the protective surrounds of Jervis Bay, two hours south of Sydney, Hyams Beach lies within the Booderee National Park and boasts an abundance of native wildlife.

“One of the things we love most about the local area are the dolphins and whales that swim by when they migrate north in the summer. It’s also not unusual to share a wave with a pod of dolphins when we’re at the beach with the children,” the owners say. As well as an abundance of native fauna, Hyams Beach boasts the world’s whitest sand (officially a Guinness World Record) hence the property’s name, White Sands.